"Doctor Liao Quan Sheng, living since 26th, Nov. 1916 until 29th, June, 2016, was from Taichung city of
Taiwan. After finishing the education of elementary school, he went to Japan for studies. In 1939 he graduated from the medical university of Manchuria. In 1946 he got the doctor degree in the medical university of Manchuria and had intensive studies of skin pharmacology. He moved back to Taiwan because of unsteable politics after the war."

In 1947 he founded the Jen-Ai hospital in Taichung city and was known for his refined medical skills among the patients. Because of it his appointments became more and the hospital was expanded and rebuilt. In 1995 the Da-li branch was founded and the Jen-Ai hospital was reformed as a foundation hospital, donated to the society like a social asset. For the past many years Liao Quan Sheng had an enthusiasm for charity events, joining in charity organizations like Rotary Club and Committee of the Red Cross, donating and helping the poor families, cultivating the talents by setting up a scholarship, and sparing no effort to take care of blind and dumb students in Huei-Ming school. Although he was almost 90 years old, he still insisted to keep his consultation as taking care of his patients is the happiest thing in his life.

The Establishment of Foundation

In 1987 the Jen-Ai hospital was evaluated as local teaching hospital by the Department of Health. Under perfect and stable development the president of board “Liao Quan Sheng” upheld the spirit “April showers bring May flowers.”. In Jan, 1988 the foundation was founded and he started helping the poor patients. With the change of the social environment, the service of national health insurance and the completed construction of Da-li branch of Jen-Ai hospital, the foundation was developing the concept and character of services simultaneously, and friendly with social welfare groups together was creating the more services mainly like helping the people and families, that urgently needed the help, so that they could get the medical subsidy and the spirit of charity could be broadened.

Aim of the Organization 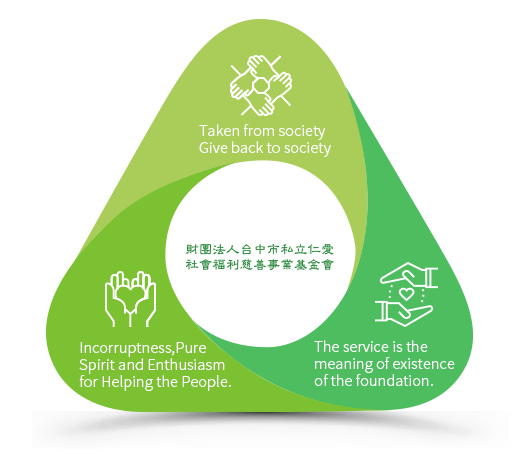 April showers bring May flowers
The service is the meaning of existence of the foundation
Incorruptness, pure spirit and enthusiasm for helping the people

The Perspective of Foundation

We are always there where the help is needed
The meaning of the happiness is we see what you need and provide a proper service for you.
Become an all-round and multifunctional social charity welfare foundation.

Spare no effort to make the dream come true. The foundation always insists to gather all love and charity of kind-hearted people from all walks of life and assist the poor families to get through difficulties step by step.

In the future with the change of Taiwanese social structure and the growth of aged population we will promote the elder community service, health contruct work and volunteer service etc. We expect to bring all warm concerns to every corner of the society and keep social charity developed.